One of our favorite things to do – if we want to get away but not stray far from home in Raleigh – is travel just thirty minutes north for a staycation in Durham. We love enjoying some of the great restaurants and breweries there or even experiencing a minor league baseball game at American Tobacco Campus. We have stayed in the most stylish hotels in Downtown Durham so we have first-hand knowledge of the best hotels near Durham Bulls Stadium.

All of the hotels are practically in the same area, in Downtown Durham, a mere handful of blocks (or less) from each other. Or simply a stone’s throw, as they say! They’re close to Durham Bulls Stadium so no matter which of the three you choose you’ll be golden for proximity to the game or action in the downtown area.

Don’t miss our comparison of all three hotels at the end of the post.

We love how deeply they support the local community! The Durham Hotel uses local brands, including Burt’s Bees, Counter Culture Coffee, and Raleigh Denim Workshop, for everything from welcome gifts in their rooms to bedspreads. Their mid-century modern design had our hearts before we ever stepped foot inside. And when we did, it only got better. We also love that they support local artists, hanging art from North Carolina creators in their rooms.

The only con we have is they don’t have a pool, but it’s balanced out with a pro point, unique to Durham: they have a rooftop bar. You can’t beat unwinding with a glass of wine or a fabulous cocktail, some oysters and a beautiful view of the city from up there. Also note they are the only hotel of the three that does not allow pets. 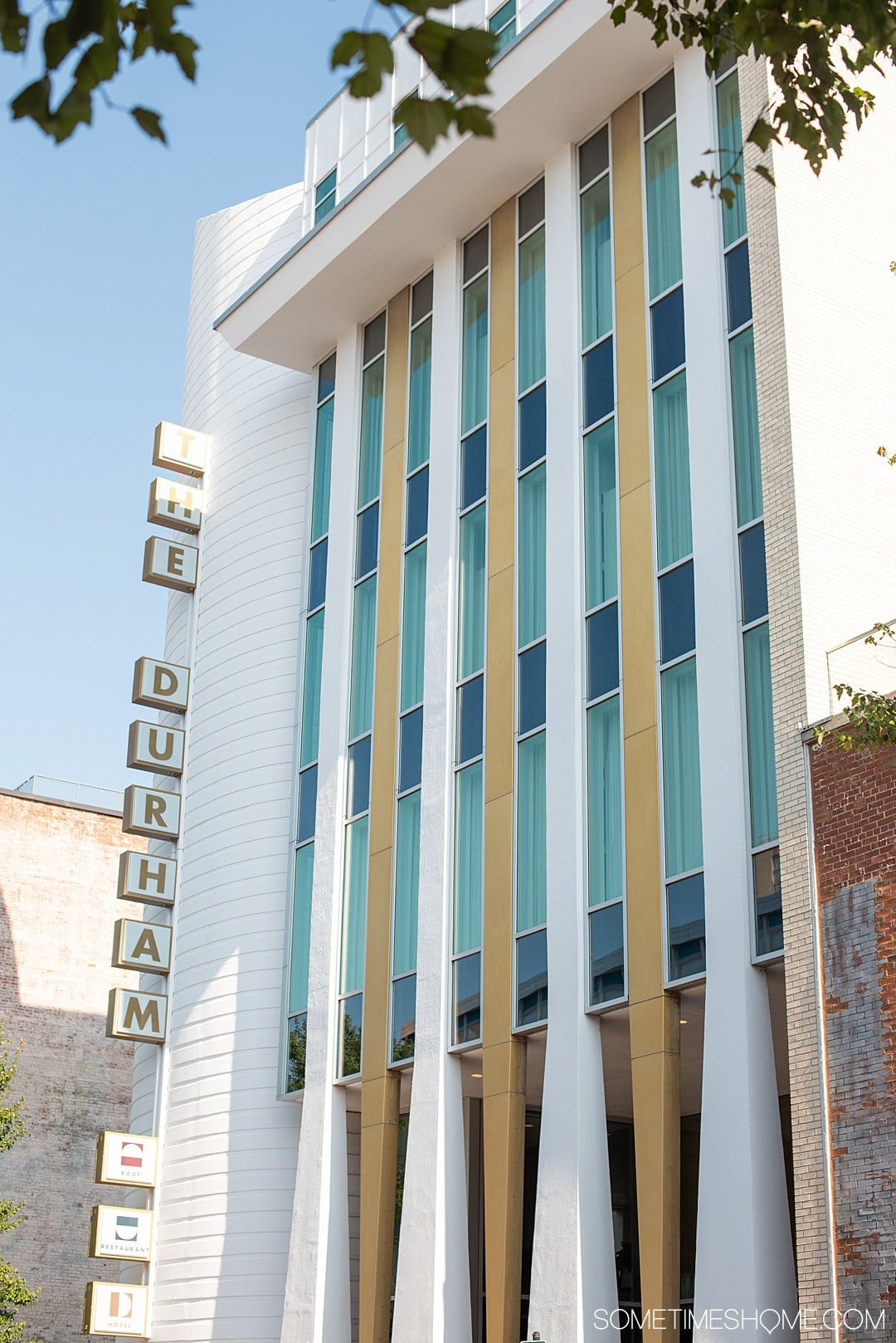 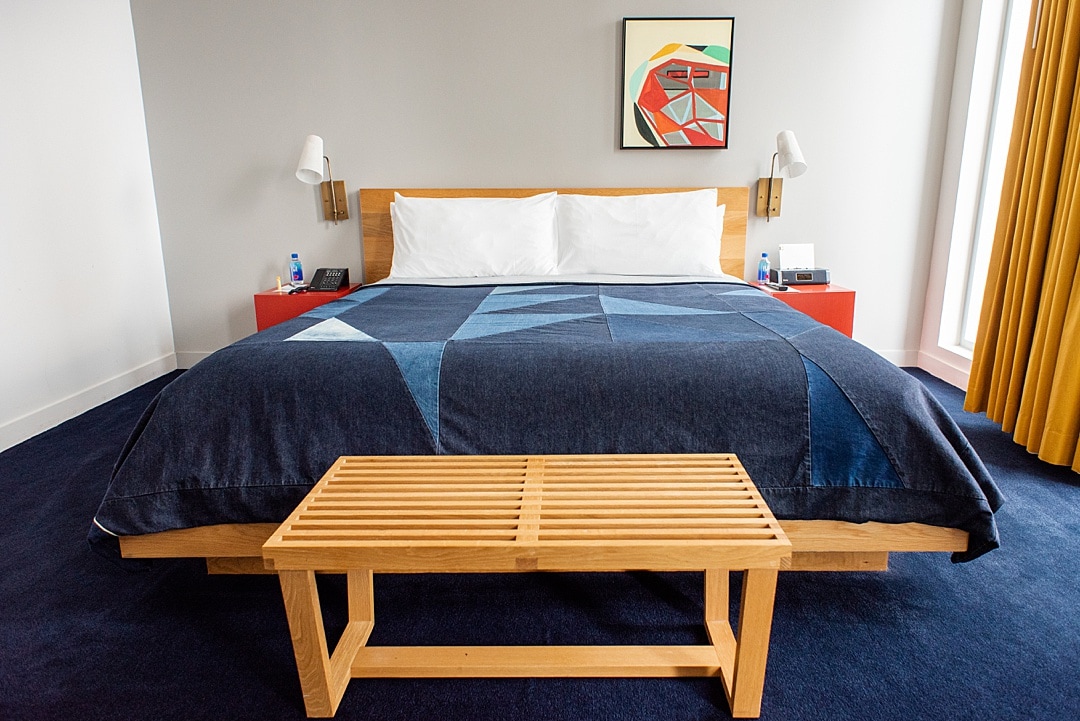 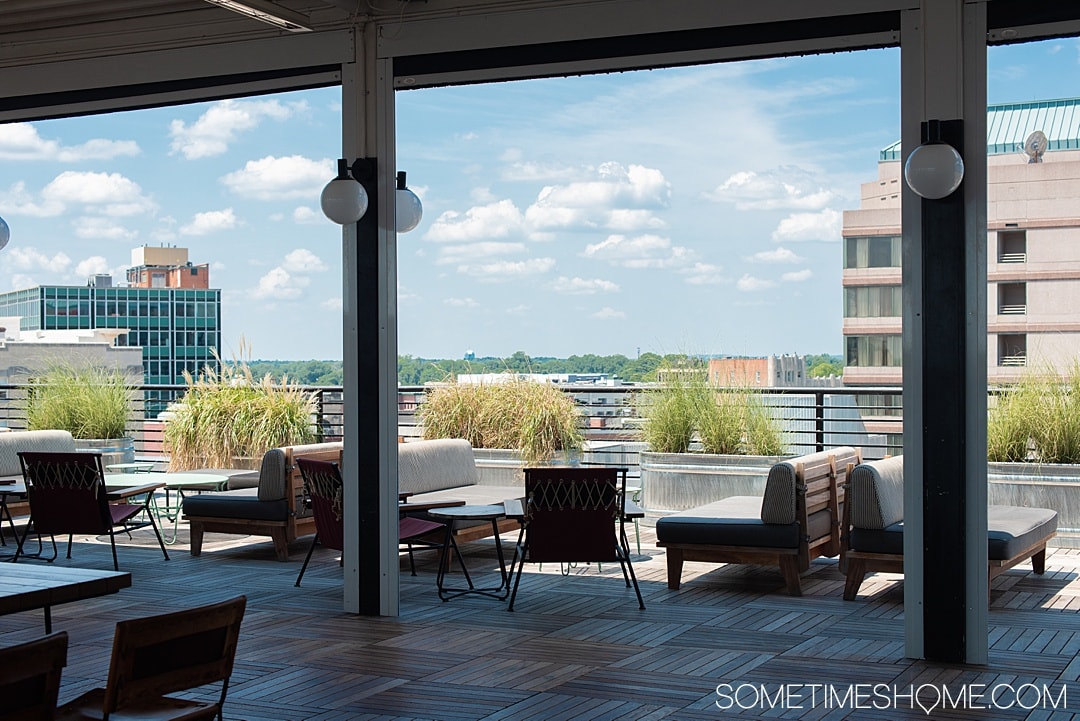 The blue color on the outside of Unscripted is sure to catch your eye as you pass by. This hip downtown Durham hotel has the ultimate cool factor with street artists who were flown in from Los Angeles to paint their walls. (We’re suckers for great street art who know a thing or two about great muralists!)

Their branding was so catchy we photographed it every chance we had. And their pool is incredibly Instagram-worthy. We love that they have parking on site, in a garage attached to the hotel.

The only setback we could think of is some of their hallways are essentially outside, motel style, but given it’s nice 90% of the time in the Durham area, with very little chances of snow during winter, that’s okay with us. They also have a North Carolina resident rate you can inquire about if you live in the state. 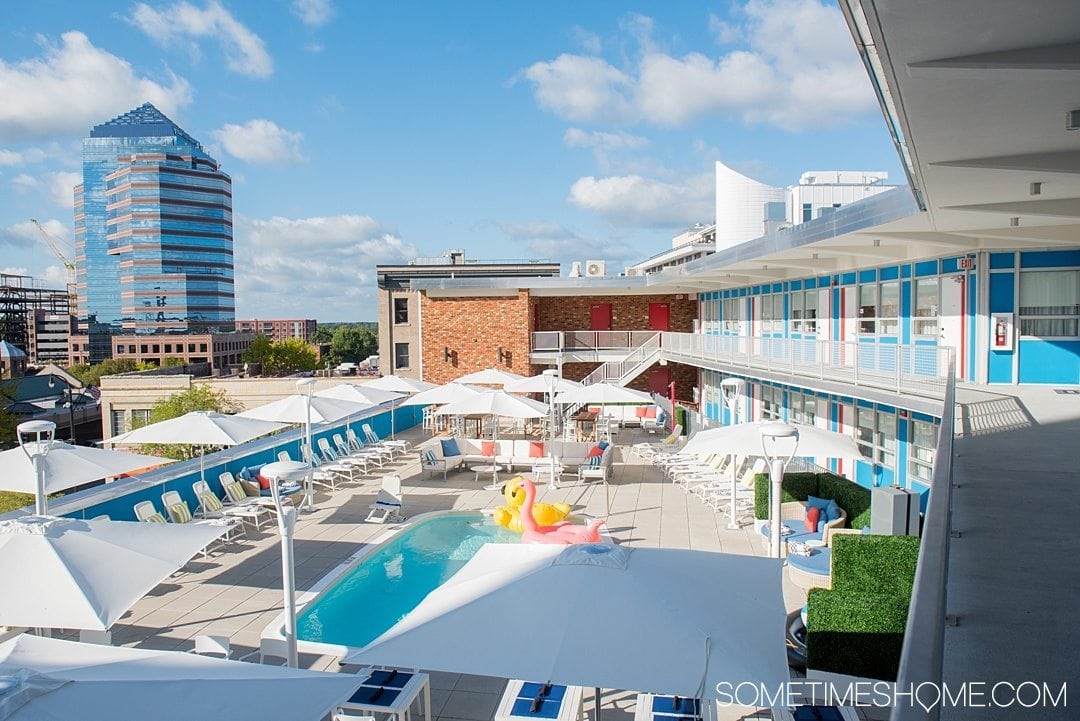 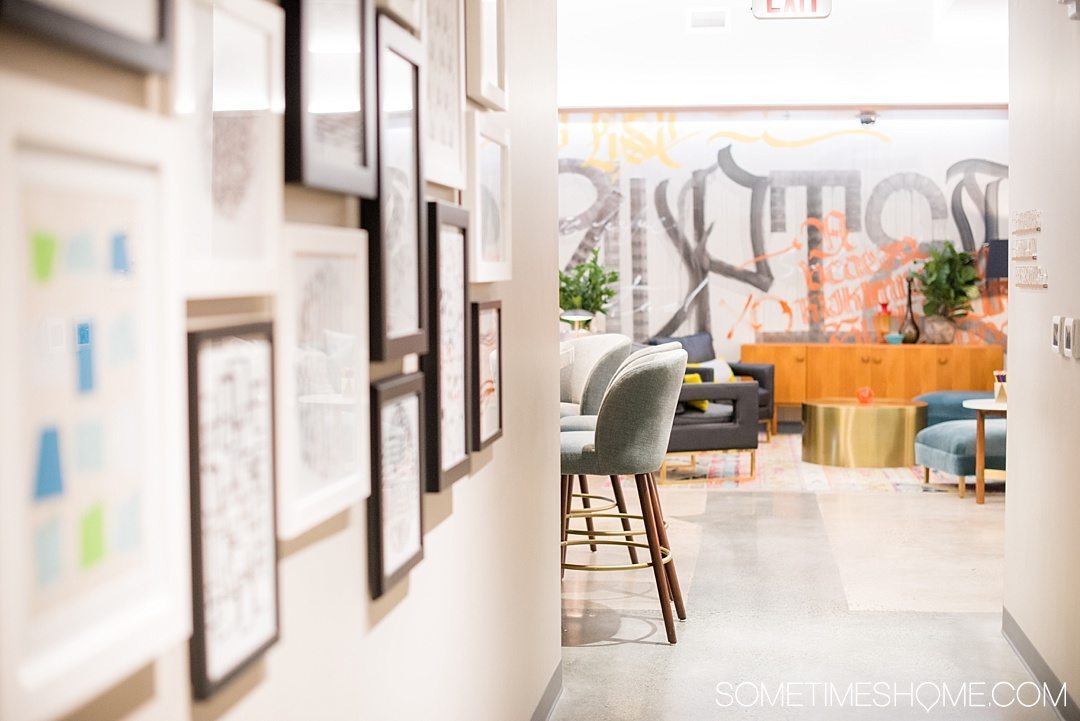 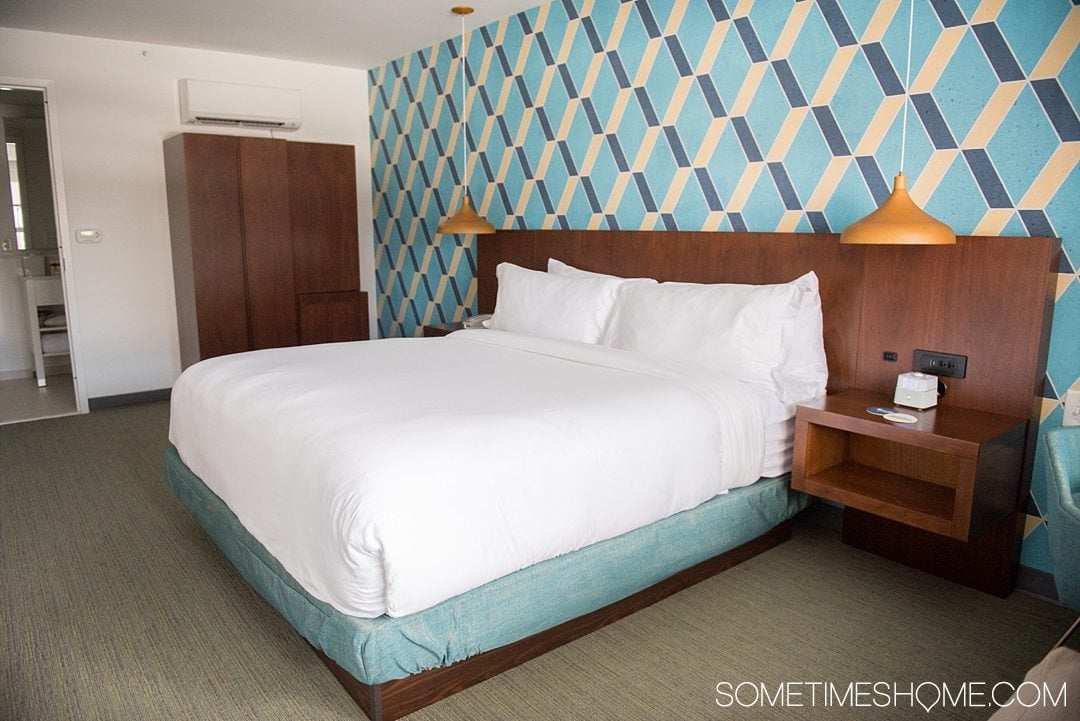 This hotel is a rare bird in our eyes. Though 21c Museum Hotel has nine locations (and growing) each one is singular in its design and exhibits. It’s literally both a museum and a hotel.

21c is an art museum with carefully curated exhibits that rotate about twice a year. They’re also a hotel, with luxury rooms and furnishings. And they put a high value on their culinary presence in their restaurant and bar on their ground level.

We miss the absence of a pool and rooftop bar but can you really complain when you get free art in exchange? Some rooms have pretty stellar city views as well as it’s one of the tallest buildings in downtown Durham.

Don’t miss spotting the pink penguins around the hotel; each 21c Museum Hotel has a unique color (Durham’s are pink) and each penguin is carefully numbered and accounted for! There’s also a bank vault in the basement that’s pretty freaking cool (and was in fact used for the bank at a point in the building’s history). The vault it next door to their onsite spa. 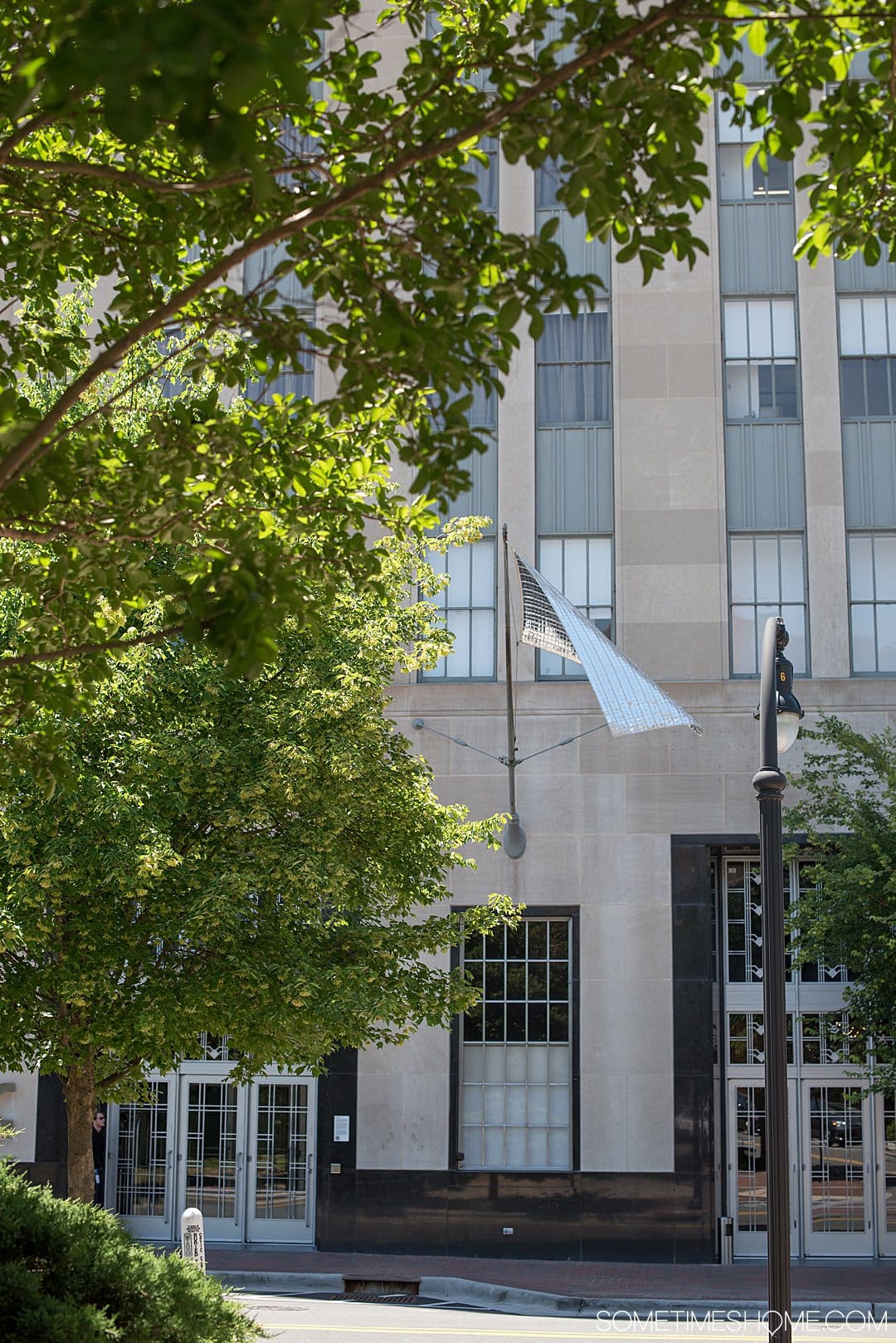 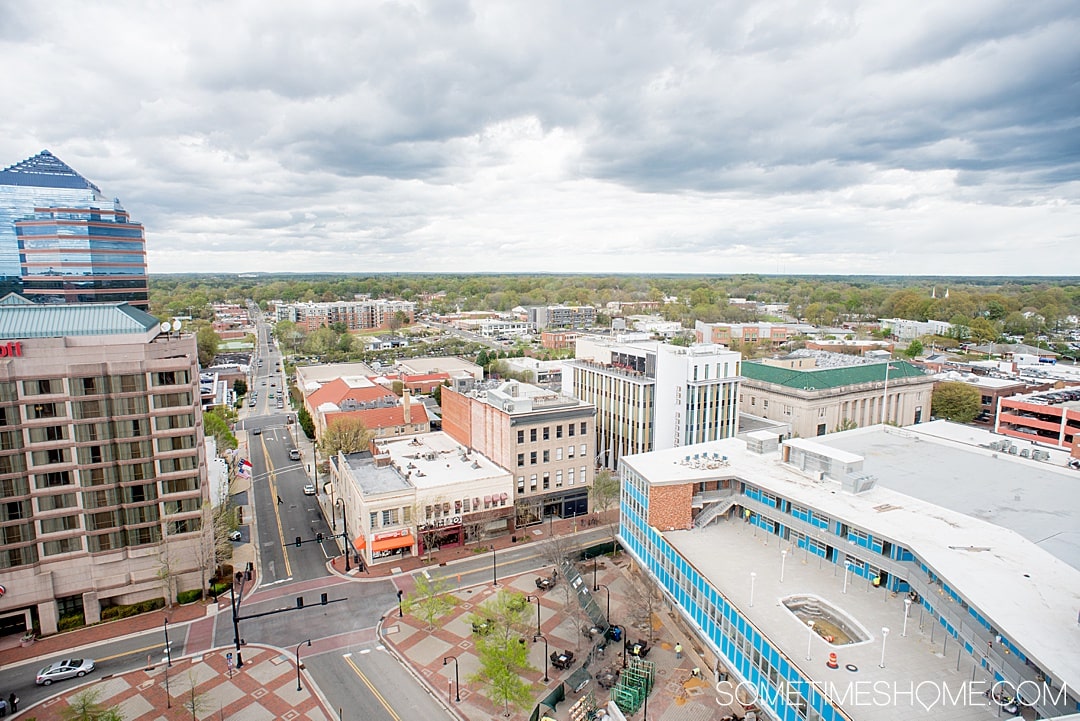 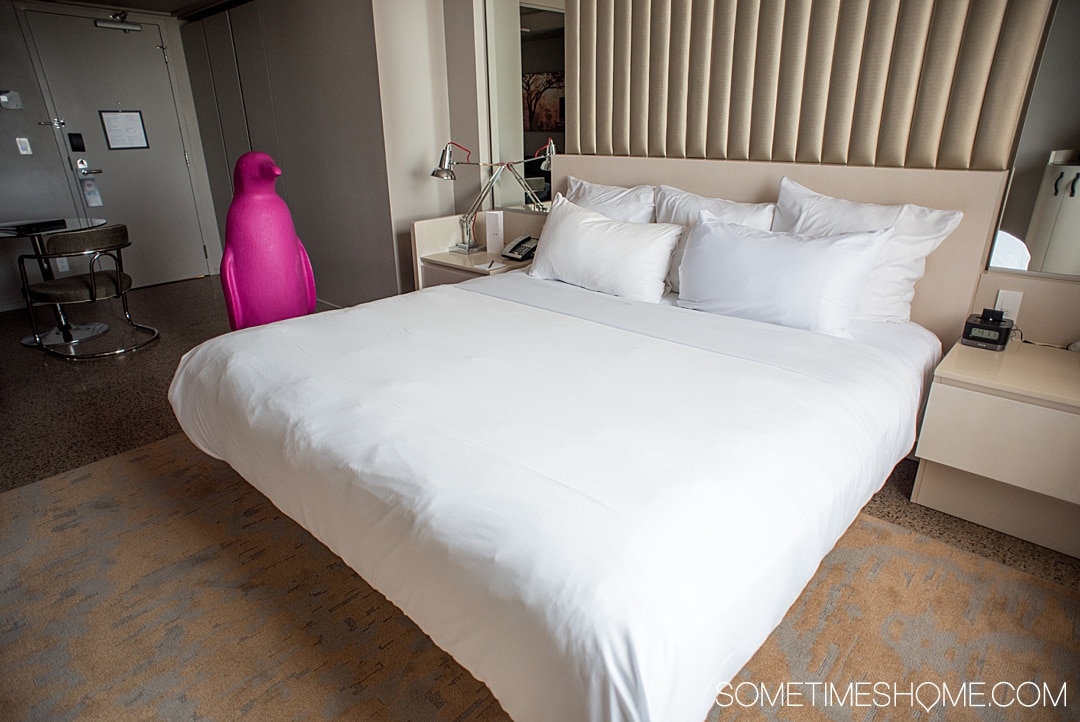 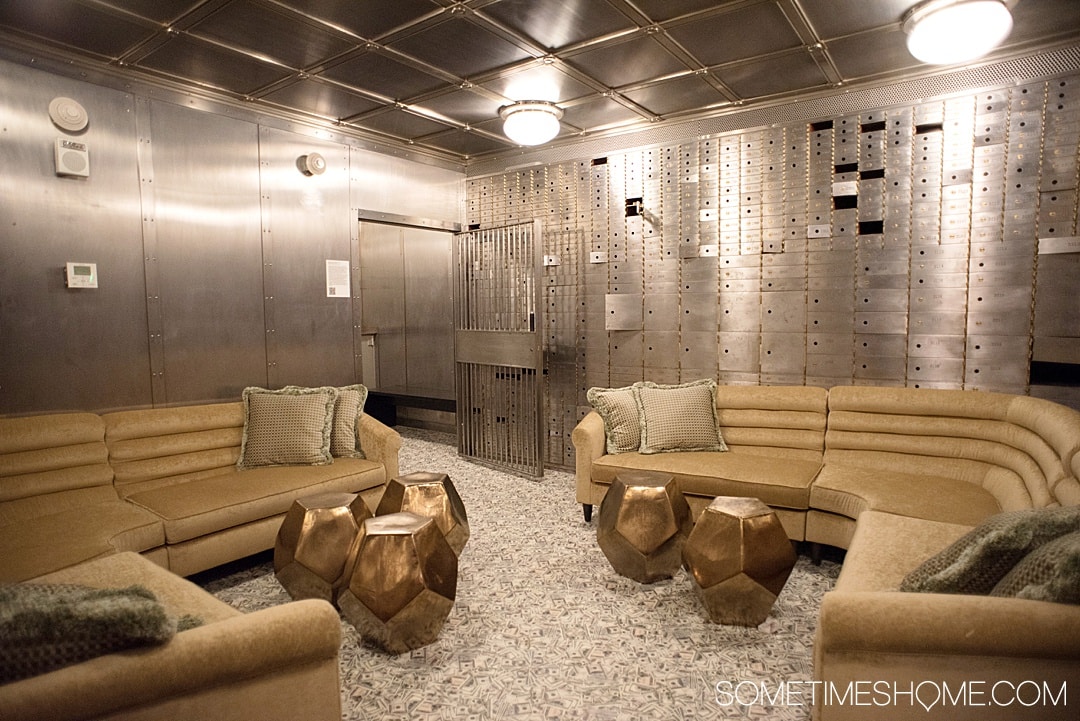 All hotels are equal on location. It’s a wash since they’re all in downtown Durham, near the Durham Bulls Stadium and American Tobacco Campus.

While it’s possible to park overnight on the street in downtown Durham there is metered parking nearly anywhere you go. Weekends are a bit more manageable as, generally speaking, you don’t have to feed the meters Saturdays and Sundays.

There’s a complimentary lot downtown if you want to park for free and walk over the hotel after check in. (Which is only a few blocks away from each of the hotels below.) The free weekend parking deck is called the Corcoran Street garage, at the corner of Corcoran Street and Ramseur Street.

Also note there is often a discount on overnight valet if you bundle it into your room rate or opt to add it on during your reservation booking. All have valet. Unscripted was the only hotel where we could self park in their attached parking lot.

Complimentary at all three hotels.

If you’re like us and appreciate hotel perks we want to note two of the three hotels are part of larger hotel groups, which means you should give them your rewards number when you check in or book your reservation:

We love dogs so we feel the need to point out dog-friendly hotels, knowing they’re a perk for dog owners:

There are so many variables that go into any hotel cost, from time of year to day of the week and then some. All three hotels compared here also have various package options to make an overnight stay extra enticing.

For comparison’s sake, we’ve looked up a Deluxe King Room for a Saturday to Sunday in mid-September, with the Flexible Rate/Non-Refundable Rate **including taxes and fees** rounding to the nearest whole dollar:

All three received stellar reviews – not just from us but from hundreds of travelers too. We’ve linked them below for your convenience:

We also want to mention there’s an Aloft hotel very, very close to American Tobacco Campus, near the Durham Bulls Stadium. Yet we chose to focus on the more boutique hotels in Durham for this post.

Please note: we thank these hotels for generously hosting us at various points in the past. We also may make a small commission from affiliate links in this post but all opinions are ours and we bring you genuine content with real facts, photos, thoughts and recommendations. Always.

Heading to the Durham area? Also check out: 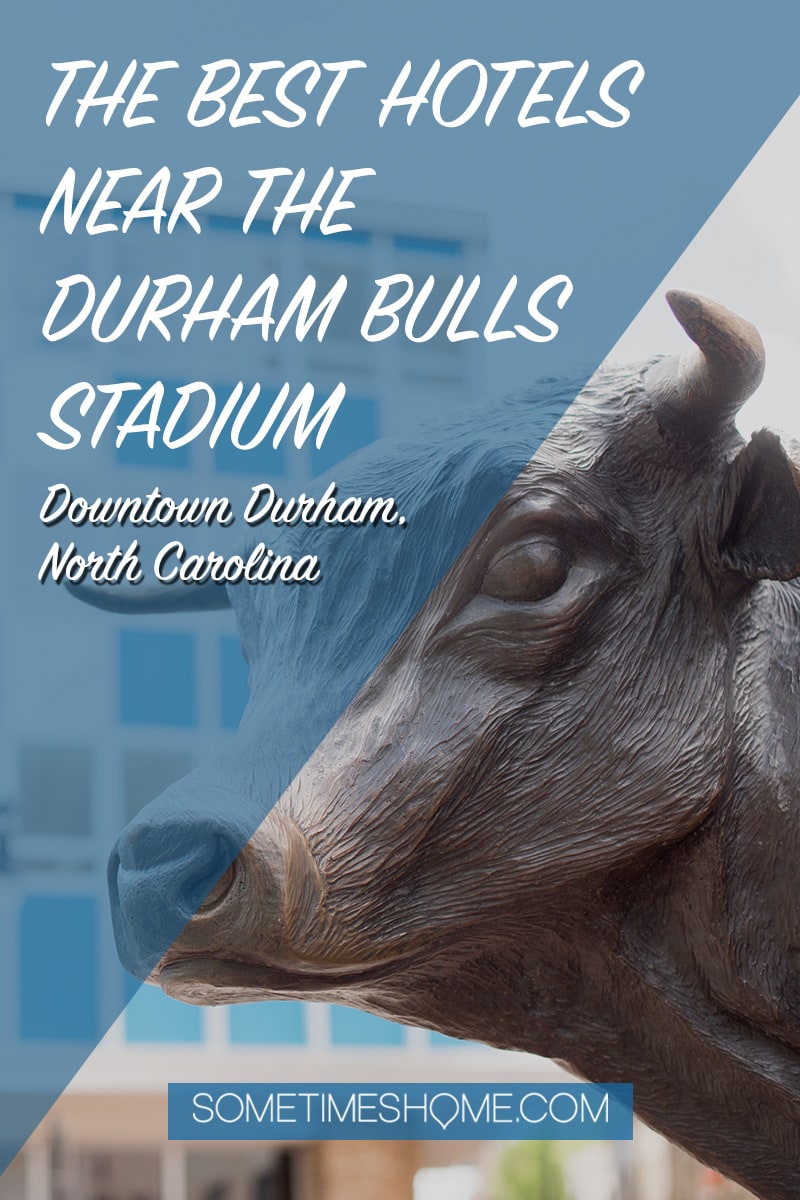