I made an offer on the house and was ready to move in the next day. At least I was prepared to do so in my mind; I was in AWE of this incredible place. It greatly inspired me and its themes resonated so strongly as we toured the historic home.

The Darwin Martin House in Buffalo is one of Frank Lloyd Wright's earliest creations. He would go on to design and build over 1,000 projects in his life. Yet this home, in particular, is extraordinary for many reasons. Its exterior is striking but the inside is what pulled my heart strings and made my jaw to drop. The Darwin Martin House is located in a residential neighborhood near downtown Buffalo, close to the city zoo. The community was planned in the late 1800s by the famed “Father of Landscape Architecture,” Frederick Law Olmsted. (I found this extra fascinating since I majored in Landscape Architecture in college.)

GPS will instruct you to turn onto Jewett Parkway, the street where the Darwin Martin House is located. (Street parking is easy to find.) You'll quickly feel like you're going to see friends for a casual visit at their home. This surprised me, as I assumed the home would be on a larger expanse of private property, akin to the Rockefeller and Vanderbilt mansions I've seen in New York. Yet as the reality of the estate's location became clear I valued it even more: It's a hidden gem in plain sight.

The Darwin Martin House is considered one of the greatest works of Wright's long and noteworthy career. The home and grounds are one in the same: Wright admirably prioritized harmonious design between buildings and gardens on this one and a half acre plot.

Its horizontal nature is worth noting and once you see it, it can't be ignored. The design was a standout amongst the mostly vertical Victorian homes being constructed during the era the Darwin Martin House was built in Buffalo. You'll notice horizontal bricks with mortar purposely deeply exaggerated between layers instead of bricks' vertical joints like in usual masonry.

The sprawling home is a fraction of what it was designed to be at the turn of the 20th century yet it's nonetheless impressive today. It's 5,000 square feet on the main and top floors and a few pieces of its original furniture remain. (And it's GORGEOUS furniture, very much in the Arts and Crafts style. Actually, the American movement of this design style started at The Roycroft, just a few miles away.) Building and Change of Ownership

The home was built between 1903 and 1905 for Darwin and Isabelle Martin. They enjoyed many years in the home until his death in 1935. Sadly it was vacated shortly thereafter; the family couldn't afford it after the Great Depression and Martin's death.

The University of Buffalo purchased the property after decades of vacancy and vandalism, investing about 50 million dollars to return it to its turn of the century glory. It was placed on the list of National Historic Landmarks in 1986.

It's in the Details

The homes details are what made my heart throb. They're so beautifully married with each ounce of the house. Every piece of glass and angle of wood was carefully crafted to bring Wright's vision to life.

We learned the brick on the exterior of the home had a thoughtful mortar application during our tour. Horizontal mortar was deepest to accentuate lines while the vertical joints were given a flush mortar finish. Inside, the horizontal mortar between bricks was given a gold finish. Subtle “opulence” (if you can even call it that) reigns supreme. Here's some of our favorite details: I've never seen anything like this home. The nature lover in me was grateful to see earth tones and tree and plant designs repeated throughout the space. The artist in me admired the craftsmanship at every turn. The designer in me knew what an accomplishment this house was. Not simply at the time but even today.

Can you imagine making a single window out of 750 pieces of carefully cut glass? Frank Lloyd Wright ensured each window in the home was a special pane or “light screen” as he called them. Wisteria is a pattern repeated throughout the home as well. Use of simple shapes echoes the Darwin Martin House's emphasis on geometry and the Arts and Crafts movement that was very popular at the time the home was built.

One of my favorite rooms in the house is its piano room. We were encouraged to sit on the piano bench and view the home from this special vantage point; I imagined a beautiful summer day where the Martins would entertain and open the doors to their outside seating area. A beautiful breeze would fill the home, which was otherwise heated and cooled with a geothermal system. Following the ceiling beams from the interior ceiling in the piano room past the beautiful skylight shows how perfectly aligned the beams that create the roof of the outdoor covered patio are. Like we said – pure harmony of design!

Dramatic space compressions and expansions are used in the home's hallways and rooms. (A compressed hallway or passageway is purposely narrowly designed to move visitors through the halls. Conversely, rooms are wide and welcoming and offer a relief from the smaller corridors that lead you into them.)

The Pergola Leading to the Conservatory

A true focal point of Wright's Darwin Martin House in Buffalo is its amazing conservatory. A winged statue, which is a replica of Nike of Samothrace, is its shining glory. Guests' eyes are immediately drawn to as soon as they enter Darwin Martin House.

It is linked to the main house through a covered, 100 foot open-air walkway (a pergola) that connects the home to the conservatory. This greenhouse area is filled with lush green tropical foliage. It's absolutely incredible how the top glass panes of the conservatory beautifully echo the same design of the home's main elements and rhythm of its shapes. Nike of Samothrace, or Winged Victory of Samothrace, stands proudly at the end of the pathway into the space. It is a replica of a very famous work of art from the second century BC, which has been on display in the Louvre in Paris for many years. This well known sculpture was the perfect addition to the Darwin Martin House's art collection, conveying confidence, motion and triumph, as Wright did over Prairie Style architecture during the era. They've made use of the carriage house and have created a gift shop. One of our favorite items was beautiful metal numbers you could use for your home's address. Another was a nod to Darwin Martin's job working for the Larkin Soap Company – you can buy your own bar here! The gift shop is where you can see the stables where horses were kept too. They rested here before they were needed for travel. Tie to The Roycroft

I spotted a book on the sitting room table by Elbert Hubbard and mentioned we had stayed at The Roycroft for two nights before our Martin House visit. Though there isn't an official tie between the Roycroft and Darwin Martin House, it's worth noting there is, in fact, an informal connection.

We learned Darwin Martin used to ride his horse from Buffalo to East Aurora to visit Elbert Hubbard, the Roycroft founder. (The distance between the two areas is an easy drive nowadays but of course took a bit longer back then.) They forged a friendship when Martin worked for the Larkin Soap Company; the company founder was Hubbard's business partner.

There are an abundance of tour options for Buffalo's Darwin Martin House. Note you must take a guided tour to see the house's interior. Operating days and hours are dependent on tours offered during your visit.

Heading to Buffalo? Also check out:

Please note: we thank Visit Buffalo Niagara and the Darwin Martin House for generously hosting us. All the opinions in the post are ours and we bring you genuine content with real facts, photos and thoughts. Always. 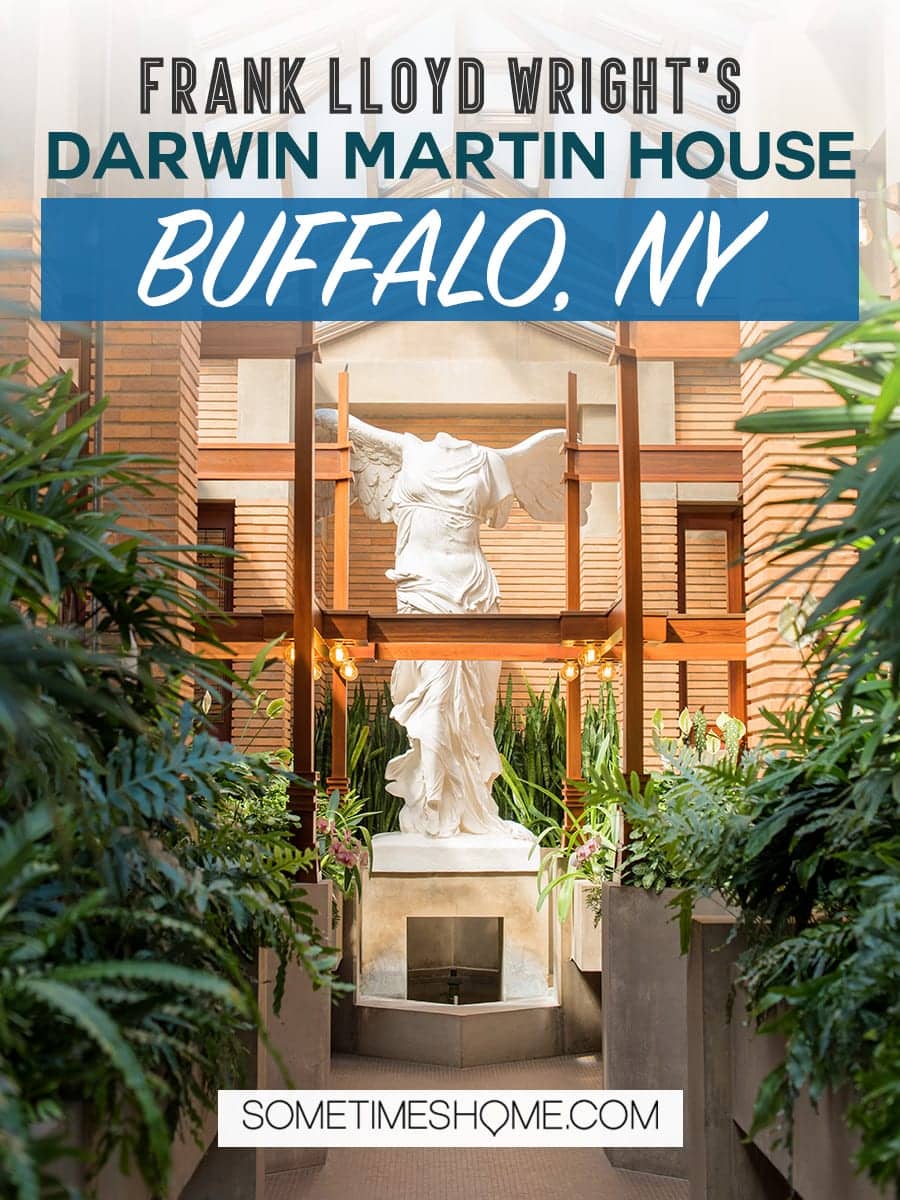